China's youth, with their improving physical condition, a broader world vision, higher moral qualities and all-round abilities, are growing into a new generation who are capable of shouldering the responsibilities of national rejuvenation, a white paper said on Thursday.

The State Council Information Office published a white paper on Thursday titled "Youth of China in the New Era", the first of its kind focusing on China's young people.

The document records achievements in the country's youth development in the new era and reflects the spirit of China's younger generation.

It was released ahead of the 100th anniversary of the founding of the Communist Youth League of China in May. The league has been playing an important role as a faithful assistant and reserve to the Communist Party of China.

He Junke, first secretary of the Secretariat of the Central Committee of the CYLC, said young people in China have a firm belief and trust in the Party and the country's socialist system, as well as in the prospects of the country's development.

Some outstanding examples of young people have emerged, such as village officials, innovators and leaders in the field of science and technology, and those who work hard and devote themselves to their posts, he said.

The white paper said: "In the new era, China's youth have shown no fear of difficulties and hardships in times of crisis, displaying their grit at critical moments. They rise to the occasion whenever the country and the people need them."

During the COVID-19 pandemic, young people have been risking their lives to combat the deadly disease. More than 5.5 million of them in 320,000 task groups have worked on the front lines, providing medical care, transporting supplies, and building facilities, it said.

Of the 28,600 nurses from the medical teams sent to Hubei province, where China's first COVID-19 outbreak occurred, 90 percent were born between 1980 and 1999. During construction of the Huoshenshan and Leishenshan makeshift hospitals in Wuhan, young workers accounted for 60 percent of the workforce, official data showed.

The paper said that in recent years, China's youth have shown rich imagination and creativity, open-mindedness, and a pioneering spirit which has become a strong force driving innovation and entrepreneurship.

Under the innovation-driven development strategy and open competition mechanisms, a large number of world-class young scientists have come to the fore in major sci-tech programs, it said.

The average age of the core members of research groups on the Beidou Navigation Satellite System is 36; the corresponding figures are 35 for the quantum science satellite Mozi and 30 for Tianyan, the Five-hundred-meter Aperture Spherical Telescope, the paper said.

As China opens its door wider to the outside world, the country's young people are building a greater understanding of international exchanges and cooperation, it said.

Over the past four decades, the total number of Chinese people studying abroad exceeded 6.5 million. The number of Chinese overseas returnees grew from 248 in 1978 to more than 580,000 in 2019, the data showed.

Under the framework of the Chinese Youth Global Partnership, China has established exchange and cooperation relationships with more than 100 international organizations, government youth agencies, political parties, and non-governmental youth organizations, the document said. 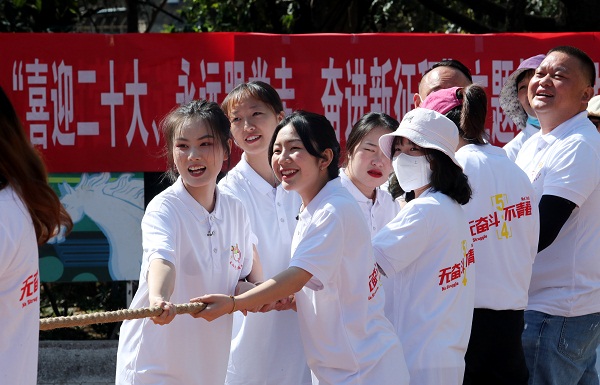