This research has made important progress in the solid fermentation of Trichoderma.

Trichoderma spp is one of the most widely used biocides in agricultural production, accounting for more than 60 percent of the world's registered bio fungicides. However, its large-scale promotion and application are limited by the raw materials, costs, and methods of production.

In the agricultural production process, many agricultural wastes that can be used as solid fermentation raw materials are discarded, causing great waste of resources and environmental pollution.

In this study, cassava peel residues were selected from five tropical agricultural wastes, such as coconut shells, as fermentation substrates. By optimizing the fermentation conditions, Trichoderma can complete the fermentation in only three days under laboratory conditions. The spore concentration reaches 9.31×109 spores per gram.

To expand the scale of fermentation, the team designed a bioreactor with ventilation and stirring system, as well as implemented a low-cost, large-scale, and highly automated industrial production method of Trichoderma spore powder to convert cassava peel residue into Trichoderma biopesticide for the first time, providing a new way to recycle tropical agricultural resources.

In recent years, Liu's team has made a series of important achievements in the research on the creation and application of new microbial preparations, publishing 15 academic essays in authoritative journals in China and overseas, as well as discovering seven high-efficiency biological control microbial strains.

The team has declared 23 national invention patents, of which five patents have been transformed by enterprises, with their scientific and technological achievements having been transformed into benefits worth $880,000. The team also produced three sets of innovative green and efficient production processes and equipment, as well as developed 15 new biological products. 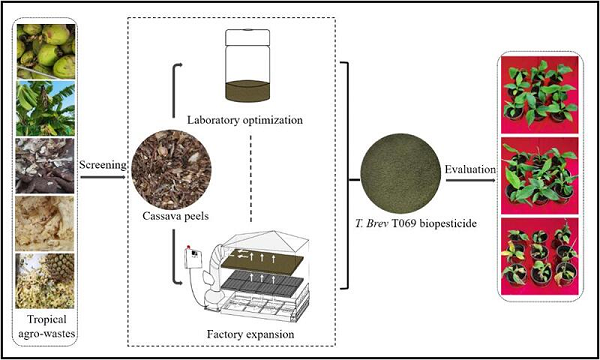