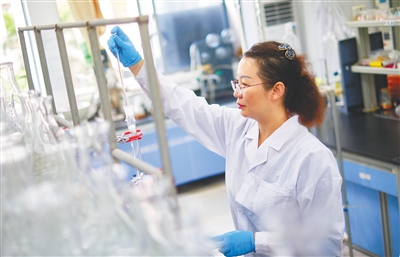 Since she started working at Hainan University in 2010, Xu Jing, a professor at the College of Chemical Engineering and Technology, has been making steady progress in delving into the pharmaceutical value of mangroves, Hainan Daily reported on April 11.

The province of Hainan has long been known as a breeding land for medicinal plants, with over 3,000 varieties accounting for 40 percent of China's total. It is the province with the most species and the greatest mangrove protection area among all provinces, autonomous regions, and municipalities in the country, with 26 species and a variation.

The journey of Xu, a graduate of HNU, and the mangroves began long before 2010. During her time as a visiting scholar at the University of Cambridge, she focused on discovering pharmaceutical compounds for severe illnesses in marine creatures and developing these molecules into leading pharmaceutical medicines.

"Hainan can provide inexhaustible resources and power for my future scientific research, which was a major reason I was attracted to work at my alma mater," Xu said. She added that the unique geographic location and climate conditions have provided lots of advantages for the growth of tropical medicinal plants.

Xu's research team now has 16 members and has developed a multi-activity screening model for immunosuppressors as well as a mangrove symbiotic fungus bank, as well as conducted a series of studies on compounds with significant physiological activity and mechanisms of action to target signaling pathways.