Wang Xiya, director of the Cathaya Education Charity Foundation and a former HNU student who majored in tourism management, said that knowledge can change people's fates and that supporting the Outstanding Scholars Program means supporting education. She donated $10 million as a thank you for the education she received at HNU, which sets an example for HNU students and contributes to the school's social progress.

The Hainan University Outstanding Scholars Program aims to introduce more talents to the university, contributing to HNU's efforts to establish world-class disciplines and a first-class university in China. Talents who are chosen will sign a deal with HNU every five years. HNU will provide long-term stable support to these talents through up to 1.2 million yuan ($190,000) in talent bonuses each year.

Luo Qingming, president of HNU, noted that HNU alumni have made great achievements and contributions to society, as well as helped HNU earn its good reputation. He added that he hoped that the university's alumni will continue to work hard and strengthen cooperation with the school.

Luo sent the donation souvenir to Wang, while Liang Mou, vice-president of HNU, accepted the receipt of the donation. 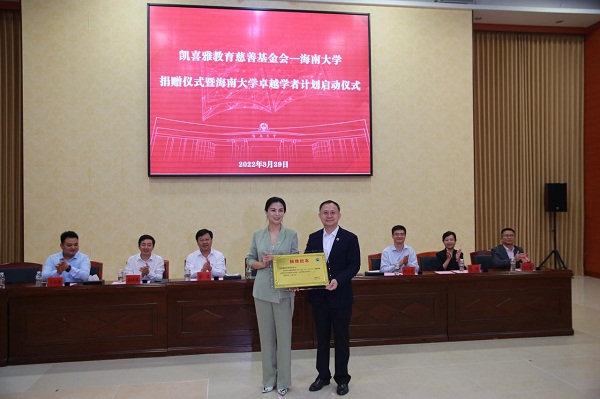 Wang Xiya, director of the Cathaya Education Charity Foundation, and former student who majored in tourism management at HNU donates $10 million as a thank you for the education she received at HNU.