Liu Qian is currently the dean of the School of Biomedical Engineering of Hainan University (HNU). The burgeoning construction on the free trade port in Hainan instilled him with a fervent desire to move to Hainan from Wuhan, Hubei province.

"Before coming to Hainan, my entire life was spent in Wuhan." Liu recalled that in 1995, he was admitted to the Department of Telecommunications of Huazhong University of Science and Technology for an undergraduate degree. He went on to obtain a master's and doctoral degree in biomedical engineering and become a teacher after graduation.

Liu said that although Wuhan is far from Hainan, he has been closely following the construction of Hainan FTP. Especially in the field of education and scientific research, he believes that there is much potential for development in Hainan. In 2020, he came to Hainan to help HNU develop a biomedical engineering program that is highly compatible with the construction of Hainan FTP.

During the one and a half years since he came to Hainan, Liu has been living a busy yet fulfilling life. The School of Biomedical Engineering has hired 40 full-time teachers over the past year, 98 percent of whom have doctoral degrees.

The Ministry of Education has given the greenlight for the college to establish authorization points for undergraduate, master's and doctoral degrees in biomedical engineering. In addition, Liu participated in the establishment of the Sanya Research Institute of HNU and served as the dean, and also participated in the establishment of the Hainan Provincial Key Laboratory of Biomedical Engineering.

"In addition to a good career platform, Hainan also has an environment that respects, trusts, and supports talent and entrepreneurs," Liu said that Hainan has formulated a series of attractive talent policies.

Liu is fully confident about his future prospects in Hainan: "The free trade port is still young and undergoing changes every day. It is at a stage where everyone can realize their ambitions." 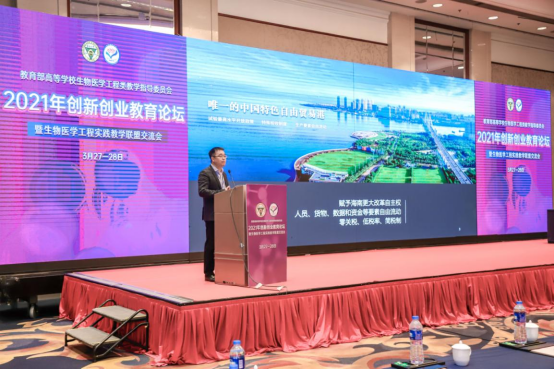 Liu Qian delivers a speech at the 2021 Innovation and Entrepreneurship Education Forum held by HNU.