"Actually, I was studying economics at first, not marine science," said Li Xiaobei, a professor at Hainan University (HNU).

In 1988, 24-year-old Li decided to study economics in Japan. He obtained a doctoral degree in international finance from Toyo University in 1999. A year later, he returned to China and became a teacher.

"My unbreakable bond with Hainan started when Hainan's international tourism island construction became a national strategy." In 2010, Li, who has experience in island economic development research, came to support Hainan education at HNU.

Over the past decade, he undertook major projects at the Academy of Oceans of China, and provided references for the environmental management of the South China Sea by studying the experiences of pollution prevention and control in the Seto Inland Sea of Japan.

In 2014, 50-year-old Li became a "student" again and went to Tokyo Ocean University to study for a doctorate in marine management in order to further study the development of Hainan's marine economy.

During his tenure as deputy dean of HNU's School of International Education, Li is responsible for the study abroad program in Japan. He has expanded cooperation with Japan in running schools and cultivating international talent. The project has opened nine phases to date, covering logistics, finance, commerce, tourism and other fields and training more than 500 students in Japan.

In 2019, the Japanese branch of the Hainan Western Returned Scholars Association (WRSA) was established in Tokyo, Japan. The association was mainly organized by Li, and it has been committed to providing services to overseas students in Japan and encouraging returnee talent to work in Hainan.

"I found a career development platform in Hainan. I also want to make more contributions to the construction of the Hainan FTP through the establishment of the Japanese branch of the Hainan WRSA," Li said. 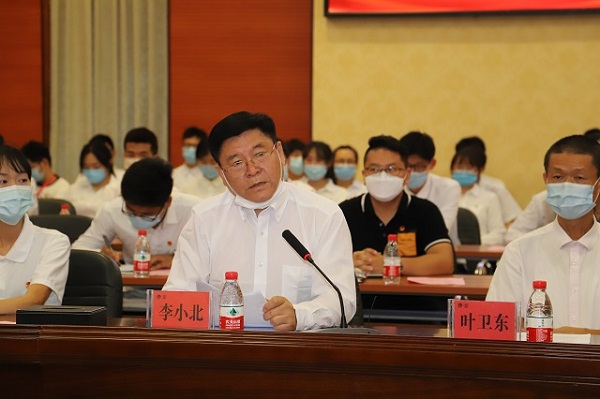 Professor Li Xiaobei delivers a speech at a forum at HNU.