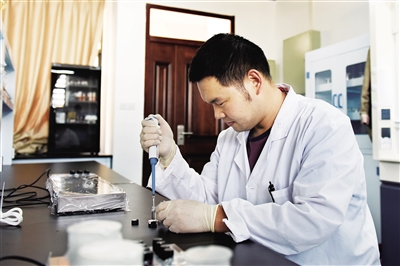 "What is it like working in Hainan?" According to Professor Tian Xinlong, two years working at Hainan University (HNU) has brought him a sense of accomplishment and belonging.

Tian was attracted by a Hainan Free Trade Port talent introduction policy in 2018. After a series of interviews and assessments, Tian was recognized as a leading talent in Hainan province and was hired as a professor and doctoral supervisor at the State Key Laboratory of Marine Resources Utilization in South China Sea.

Just six months after entering the laboratory, Professor Tian, due to his outstanding track record in scientific research, formed his own team and became the leader of the "Clean Ocean Energy" innovation team.

Relying on the policy advantages provided by Hainan FTP, Tian's team has grown to 34 people in just two years' time, four of whom are post-doctors and three of whom have doctor's degrees.

Since he came to Hainan two years ago, HNU has helped Professor Tian solve problems related to his spouse's employment, children's schooling and housing, as promised.

The care provided by HNU staff also makes Tian feel at home. "Just a few days after I came to Hainan, Wang Nengyou, secretary general of the Hainan Alumni Association of Huazhong University of Science and Technology, contacted me and introduced me to many alumni. We often get together and have become friends."

"With the construction of the Hainan FTP, talent from various colleges and universities will come here. Everyone can feel a sense of belonging in Hainan." Tian said.