Hainan University (HNU) hosted the 2021 commendation conference for outstanding Party members and organizations on June 28, in celebration of the 100th anniversary of the founding of the Communist Party of China.

The conference opened with the national anthem, and then participants rose to their feet and renewed their pledge to join the Party in the face of the Party flag.

The conference awarded commemorative medals to those who have been Party members for over 50 years. Several distinguished Party members, Party affair workers and grassroots Party organizations were also honored at a special ceremony.

Liao Qinglin, executive deputy Party chief of HNU, paid his respects to all veteran Party members who were awarded commemorative medals, congratulated the distinguished Party members, Party affairs workers and grassroots Party organizations who were commended, and extended greetings to all Party members at the university.

Liao stressed that all Party organizations and Party members should take a leading role in creating internationally first-class disciplines and domestic first-class universities, and should contribute to the construction of Hainan Free Trade Port. They should set an example in contributing to talent training, scientific research, social services, cultural preservation and innovation, as well as international exchange and cooperation. 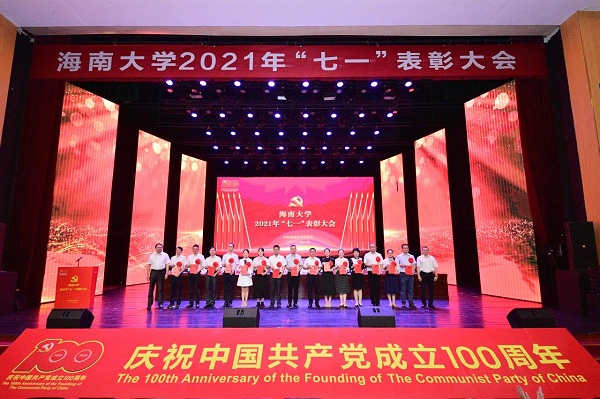 HNU hosts the 2021 commendation conference for advanced Party members and organizations on June 28.