From January to early May, members of the Hainan University Belt and Road Research Institute published 17 theses in top academic journals and took part in 13 interviews with mainstream media outlets.

For instance, the theses Belt and Road Initiative (BRI) Synergy Vital for Economies to Endure Coronavirus Impact and China, West can Cooperate on BRI Debt Issues written by Liang Haiming, president of the institute, were published by Global Times.

Liang's joint work Electric Power Development Associated with the BRI and Its Carbon Emissions Implications with Michael Celia, a member of the US National Academy of Engineering, and Celia's doctoral student Tao Yiheng was published by Applied Energy. 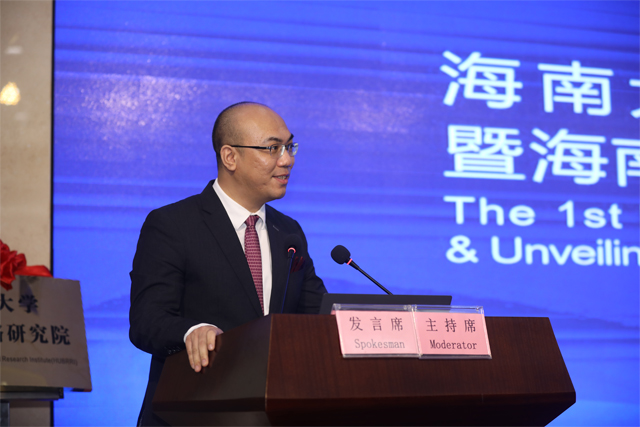 Liang Haiming speaks at the launch ceremony of the Hainan University Belt and Road Research Institute, which is expected to crack the top 100 domestic university think tanks and become one of the core think tanks regarding BRI studies.

In addition, Liang also shared his insights on the effects of the accounting scandal at Luckin Coffee on other US-listed Chinese companies in his interview with Global Times. He noted that the scandal is not a good thing for Chinese regulators and companies, as well as suggested that domestic small and medium-sized private companies should draw a lesson from the case on how to follow the rules of the global markets during the process of "going out."

The research institute, which eyes increasing influence nationwide, will further deepen its research on the BRI and Hainan Free Trade Port (FTP) construction, as well as contribute its wisdom to government decision making.