Hainan University (HNU) and the Dongfang municipal people's government will collaborate in talents, science and technology, education, culture, as well as volunteer services under a strategic cooperation agreement signed on March 27. 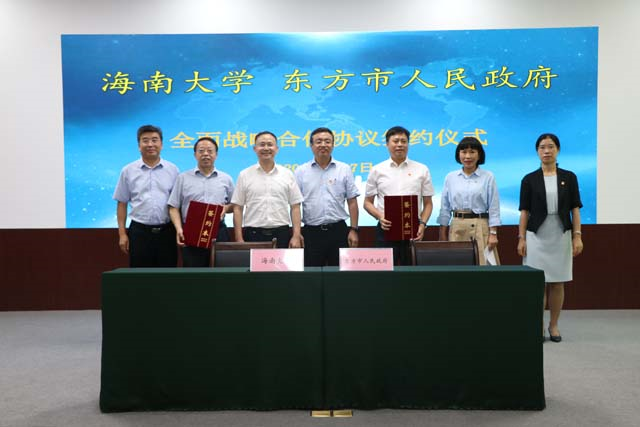 The university had previously sent a team to aid in the rural rejuvenation of Lemei village, which has made remarkable progress.

Before the signing ceremony, Luo Qingming, president of HNU, led a delegation to tour Lemei. In addition to talking to the HNU team and local farmers, he also made field trips to the dragon fruit, camellia tea oil, and orchid industrial bases.

One ton of fertilizer and a batch of camellia tea oil seedlings were donated by the HNU delegation to the village.

Luo pleged to increase efforts to help lift Lemei out of poverty with its strengths in science and technology. He stressed that the education of rural students is the permanent cure to the intergenerational transmission of poverty.

Tie Gang, Party secretary of Dongfang, spoke highly of HNU's contribution to local poverty alleviation efforts. He noted that Dongfang boasts advantages in its geographical location and resources. He added that the city is willing to ramp up cooperation with HNU in talent cultivation and scientific research achievement transformation, contributing to the Hainan free trade port construction.

The two sides are expected to realize common development and shared benefits based on resource sharing and complementary advantages.