Students from Hainan University (HNU) have knitted scarves for children in mountainous areas for eight consecutive years under the initiative of Zhao Hongliang, a teacher at the university's College of Politics and Public Administration.

A total of 800 students signed up when the "Heartwarming Scarves" project team of HNU's Love Art Club recruited volunteers in November. Many middle-aged women from neighboring residential communities also took part in the project.

The woolen yarn and knitting tools were purchased by the club with funds provided by the university and enterprises. Volunteers then received training on knitting skills. 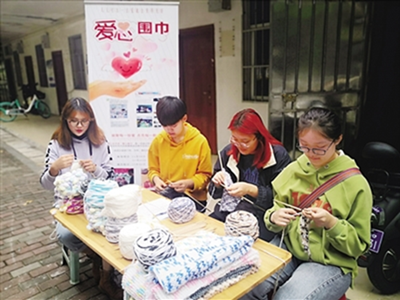 To date, the project team has received 700 scarves made by hundreds of students, of which 300 have been sent out. The others will soon be delivered to primary schools in mountainous areas outside of Hainan province.

As knitting scarves spread warmth without taking too much time to make, Zhao first had the idea for the project in 2011. He put it into practice in 2012 along with the students of the Love Art Club. In January of that year, 100 scarves were sent to Motuo county in Tibet. Since then, the participating students will look for schools in impoverished mountainous areas around their hometowns that need scarves during their summer and winter vacations.

Zhao was selected as one of 10 recipients of the 2012 Touching Hainan Award.