A delegation led by Richard Trappl, dean of the Confucius Institute at the University of Vienna and head of the Hainan Association of Austria, paid an exchange visit to Hainan University on Nov 25.

The delegation was received by Ye Guangliang, vice president of HNU, who later took part in a communication symposium with his Austrian guests.

During the meeting, Friedrich Edelmayer, a professor at the University of Vienna, gave an introduction on the Eurasia Pacific Uninet, a network that aims to establish contacts and scientific partnerships between Austrian universities and educational facilities with institutions in Eastern Asia, Central Asia, and the Pacific region.

Wolf Dieter Rausch, president of the Eurasia Pacific Uninet, expressed hopes to team up with Hainan University to carry out programs of scholar visits, teacher communications, and student exchanges.

Ye gave an introduction on Hainan University to his guests and said that the school, already selected as a national "world-class discipline" construction university, has a long tradition of opening up to institutions outside of China. He expressed hope that HNU can develop more cooperation and exchange projects with the Confucius Institute at the University of Vienna.

After the meeting, the delegation toured the school history museum and the Tourism College of HNU. 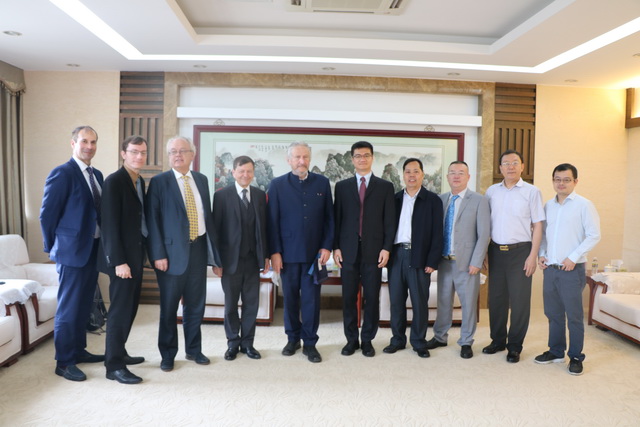 Ye Guangliang (R5) meets with the delegation from Austria.