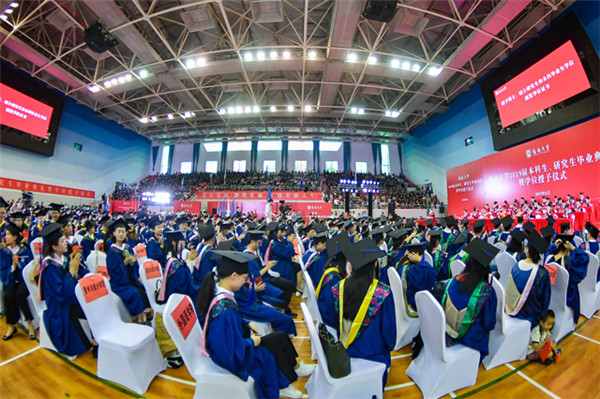 A graduation ceremony and degree awarding ceremony is held in Hainan University.

The 2019 Graduation Ceremony and Degree Awarding Ceremony of Hainan University was held at the Friendship Hall of Haidian Campus on the afternoon of June 16, 2019. A total of 8,743 students, including 7,615 undergraduates, 1,105 postgraduates and 23 doctors from Haidian and Danzhou campuses were graduated.

With the broadcasting of a graduation publicity film, the graduation ceremony was launched at 3: 00 p.m. All teachers and students solemnly stood up and the national anthem was played. 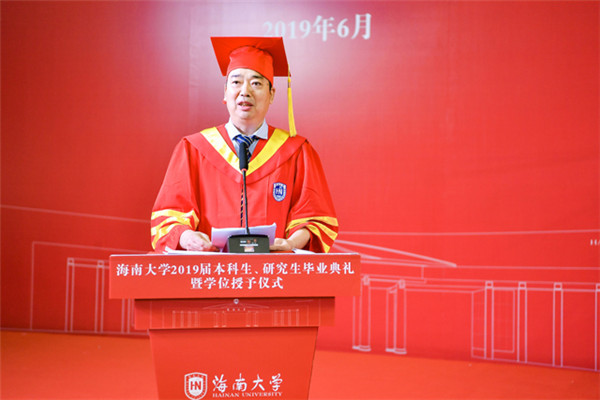 Wu Yaoting speaks at the ceremony.

Wu Yaoting delivered a speech at the ceremony congratulating all the students on behalf of the school, and expressing respect and gratitude to parents and teachers. Wu reviewed the achievements of the school in recent years and praised graduates for their contributions to its development. He said that he hoped the students will carry forward the school motto of openness and inclusiveness, and stick to their original intentions, their ideals and their bottom lines, so that they can make steady progress in their lives and become leading talents in all industries.

Luo Qingming awarded degrees and certificates to all doctoral, postgraduate and undergraduate representatives respectively. Liao Qinglin read out the commendations for outstanding graduates. Fu Guohua read out the document for awarding degrees. All members of the standing committee of the Party committee and school leaders presented awards to the outstanding graduate representatives. 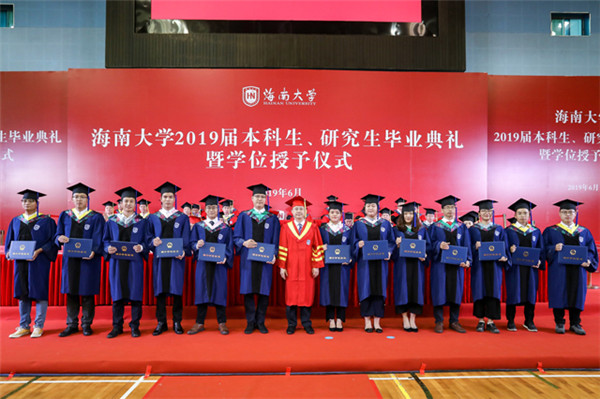 Luo Qingming takes a group photo with students at the ceremony.

At the ceremony, teachers and students sang I Love You, China. The graduates stood up and bowed to teachers, parents, relatives and friends. Subsequently, the degree awarding ceremony was simultaneously held at the four sub-venues of agricultural science, science and engineering, humanities and arts, and philosophy and sociology, where the deans of each college jointly awarded degrees to undergraduates and postgraduates.

Representatives of all graduates recalled their growing up in Hainan University and expressed their gratitude to their alma mater and their hopes for the future. On behalf of all teachers, Wang Fang reviewed the past and looked forward to the future, and asked the graduates to visit the school often. On behalf of all parents, Liu Yinzhi thanked the school for the education and care given to the students. On behalf of the alumni, Lu Kai quoted several words from A Letter to Freshmen on the official website of Hainan University to express his wishes and his hopes for the future. 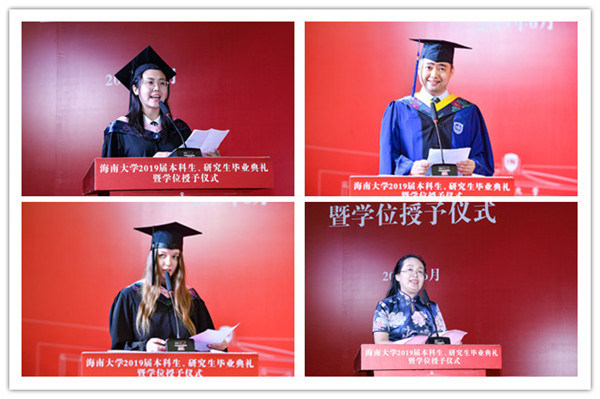 Student and parent representatives speak at the ceremony.