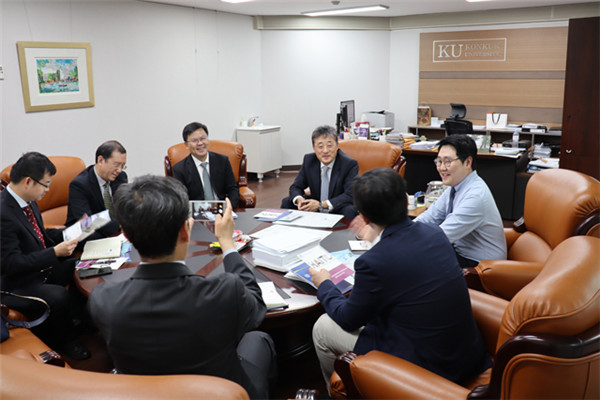 From May 17 to 24, at the invitation of Konkuk University and College of Micronesia, Liang Mou, vice president of Hainan University, led a delegation of three on an overseas trip to South Korea and the Federated States of Micronesia (FSM) to serve national diplomatic needs, enhance the international presence of Hainan University, and deepen exchanges and cooperation with overseas universities and institutions.

In his trip to Konkuk University, Liang was received by its vice president and head of its international office. The two sides exchanged views on development and bilateral cooperation in the last five years, and agreed to sign a student exchange agreement for further cooperation. The delegation also met with four Hainan University students on exchange, enquired about their study and life in Korea, and encouraged them to enjoy and make full use of their stay there. Liang then had a meeting with executives from a Korean company, CJ Bio, on sustainable green breeding.

On the morning of May 21, Liang and his delegation visited the College of Micronesia, accompanied by Ambassador Huang Zheng and Counselor Zhang Weitao from the Chinese Embassy, and Vincent Sivas, minister and deputy chief from the Micronesian Embassy in China. The visitors met with university president Joseph Daisy and vice president Karen Simon for a candid discussion on joint programs and collaboration. It was agreed that both sides will work on joint teaching programs as well as faculty and education exchanges in areas of oceanography, tourism, and agriculture. The opportunity to set up a Chinese language teaching center was discussed, along with follow-up planning in this regard. The meeting was closed with a signing of an MOU regarding a friendship university relationship.

On the morning of May 22, Liang led the delegation to the FSM's Ministry of Education, where he reported on his visit to the College of Micronesia and sought guidance and support from the Ministry on the partnership. Education Minister Kefas and national education advisor Kalki spoke highly of practical cooperation sought by the two universities, reaffirmed that oceanography, tourism and agriculture cooperation meet the development needs of the FSM, and confirmed their support of the language center from the national government, in order to lay a good foundation for university cooperation and even bilateral cooperation between the two nations.

On the evening of May 22, the Chinese Ambassador Huang Zheng and his wife held a reception for Joseph Daisy, president of College of Micronesia. The delegation was invited to the event. Ambassador Huang stated the embassy's full support on comprehensive collaboration between the two universities in order to promote closer exchanges of culture and peoples between China and the FSM. President Daisy said that the delegation's visit effectively enhanced mutual understanding, and suggested that both sides should set up dedicated teams to work closely and efficiently for cooperation plans in relevant areas by the end of the year, which will be a tribute to the 30th anniversary of the establishment of diplomatic relations.

During the visit, the delegation visited the sea-culture centers, as well as demonstrative tourist and agricultural projects in the FSM. They also attended the graduation ceremony of the 69th Class of the College.